Julie Reagan is the editor of HAI Focus

We were honored to have a comment published to HAI Focus last week. It is a website designed to help you find the information or news you need about healthcare-associated infections (HAIs) and infection control. The site is updated on a daily basis to reflect current news and events related to HAIs. Our comment was in response to a recent patient notification that is taking place on Long Island. Click on the link http://www.haifocus.com/lets-talk-lives-depend-on-you/ or read the comment below.

I remain troubled by the news that 4,277 patients on Long Island, because of improper use of an insulin pen, have been placed in harm’s way (“Nassau hospital’s call to test injected patients seen as opportunity,” March 15). These men and women are in my thoughts and prayers.

I joined the CDC and its partners in 2008 to launch the One and Only Campaign. Because of troubling patient notifications and devastating outbreaks that have occurred in the last six years, our work on the campaign has expanded. We developed extraordinary resources on proper use of the insulin pen, for instance. I encourage healthcare workers throughout New York and the area to take time to reeducate themselves on all injection safety fundamentals.

In addition to my encouragement to healthcare workers to always give a safe injection, I encourage them to be unafraid in addressing each other directly, anytime injection safety standards are violated—or seem to be.

I was one of 99 people in Fremont, Nebraska, who was infected with hepatitis C while receiving treatment for cancer at an outpatient clinic in 2002. Syringes were reused, and the saline flush was used improperly. Not only does an outbreak of hepatitis C affect patients, it affects an entire community. Notifications like the current one on Long Island chip away at a community’s confidence in its medical care.

Did anyone speak up, when my fellow patients and I, people who were fighting one fatal disease only to have to take on another, were being violated over a long time through unsafe injection practices? Sadly, the answer is no.

In the recent reports, it appears an unnamed healthcare worker did make a stand. He or she heard a colleague say it’s okay to reuse an insulin pen on more than one patient. As we know, blood can become trapped in the reservoir and, if it is reused, cause an infection. As it states in the One and Only Campaign materials, “Insulin pens that contain more than one dose of insulin are only meant for one person.”

To the healthcare worker who said to his or her colleague, No, that is not how it is done, we issue our thanks. I expect this person will not perceive him or herself as strong or brave. I expect he or she would say, if I had a chance to provide a commendation, I was just doing my job.

However, speaking up to a colleague, and especially to a person of higher rank, clearly does not occur as often as it should in healthcare. I am one of many people throughout the United States who have been deeply affected by ongoing, unchecked unsafe injection practices.

On behalf of my fellow patients, and with the patients from Long Island in our minds and hearts, I urge healthcare workers to be unafraid to say, “Stop.” To say, “No.” Lives depend on you.

It is our pleasure to share with our many friends, colleagues and donors our 2013 annual report. It it available in a tri-fold brochure, and we would be happy to send it to you. We encourage you to distribute this information to your colleagues, and we welcome the opportunity to continue to support the need for safe injection practices throughout the country during 2014. Thank you for doing your part to help protect patients. Please call on us anytime.

HONOReform is the only national advocay organization dedicated to protecting patients through safeguarding the medical injection process.

Our Current Mission and Vision

HONOReform is the only national advocacy organization dedicated to protecting patients through safeguarding the medical injection process. Our vision is a nation in which health care providers always follow fundamental injection safety practices that are designed to protect all patients each and every time they receive an injection.

Expansion of our Mission in 2014

Starting in 2013, Evelyn McKnight of HONOReform encouraged all stakeholders to join her to help safeguard the entire spectrum of the medical injection process—from manufacturing to disposal. This year, Evelyn encourages healthcare workers to please “speak up if you see a colleague not using safe injection practices.” END_OF_DOCUMENT_TOKEN_TO_BE_REPLACED 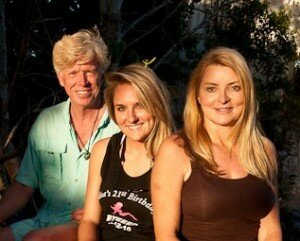 Melisa French is a survivor of the Florida outbreak of 2010

Melisa French has conquered many challenges in her very full life. As a certified cave diver, she often dives in wells hundreds of feet below the surface in search of Mayan skulls and artifacts. But the biggest challenge of her life came when she found out she had contracted Hepatitis C.

Melisa was vibrantly healthy when she sought a second opinion on hormone replacement therapy from a holistic and alternative health clinic in Florida in 2009. During the single IV vitamin infusion she had there she grew concerned when the nurse did not wipe the tops of the many vials of injectables with alcohol and accessed each with the same needle and syringe before she capped it and put it in her pocket. When the nurse removed the IV tubing from Melisa’s arm, she let the bloody tubing dangle from the IV pole instead of disposing it in a hazardous waste receptacle. There was no hazardous waste container in the room, hand washing sink, or alcohol hand hygiene products. Melisa left the clinic vowing never to go back. END_OF_DOCUMENT_TOKEN_TO_BE_REPLACED

I am honored to be a patient advocate with the Patient and Family Engagement Network of the Partnership for Patients. The Partnership for Patients initiative is a public-private partnership working to improve the quality, safety and affordability of health care for all Americans, and I am very proud of its efforts to achieve its goal of 40% reduction in hospital acquired conditions and a 20% reduction in hospital readmissions compared to 2010.

As patient advocates, our role with the Partnership is to encourage and support collaboration between healthcare providers and patients and families to improve healthcare and reduce cost. Along with other advocates, I posted to the National Patient Safety Foundation’s website blog to highlight Patient Safety Awareness Week 2014. In the words of fellow advocate Helen Haskell, ” Patient Safety Awareness Week has been an important symbol of hospital involvement in patient safety. It is not just about safety, but about awareness of all that patients can teach health care providers about themselves.”

Following is my blog celebrating the patient/provider partnership. END_OF_DOCUMENT_TOKEN_TO_BE_REPLACED

Dear Friends:
We are so grateful to share this news—so proud of our colleagues at the CDC and the CDC Foundation and our many partners on the Safe Injection Practices Coalition for the extraordinary work over the last six years, which has led to this important announcement: welcome to representatives of Eli Lilly, and many thanks for providing funds, for the next three years, to continue (and to expand) our vital and ongoing work!

On behalf of HONOReform advocates—and with the many Americans who have been affected by unsafe injection practices in mind—we thank our new partner for their generous support of the mission and goals of the SIPC.
We include the announcement, below. We encourage you to share this good news with your network.
Evelyn and Lauren

More than 150,000 patients have been notified of potential exposure to hepatitis and HIV due to unsafe injection practices in U.S. healthcare settings since 2001. END_OF_DOCUMENT_TOKEN_TO_BE_REPLACED