It has been almost five years since many of my fellow Coloradoans and I were wondering if we would be okay, if we would live. I had learned of my hepatitis C diagnosis months earlier than the others, as I was symptomatic, most of the victims were not. I kept asking how this could happen to me, all the while fearing that it wasn’t just me suffering. I feared for my future. I feared for the future of my daughter, Lucy, who was just one year old. A few months later, in July 2009, we learned that Kristen Parker, one of three known drug diverters in recent years to infect patients, had been the source of this deadly disease. Thousands of letters went out to patients who may have come into contact with Kristen and therefore put into harms way.

Unbeknownst to me at the time, I was following in the very brave footsteps of Evelyn McKnight and HONOReform. So with the support of some vital people, I tried to make a difference. I could not stay silent. I spoke to media and told my story and the story of the outbreak. I tried to put a name and a face to this tragedy, as some of the victims were too ill to speak out for themselves. Soon some Colorado lawmakers approached me to work with them to help make some real changes. And we did! I am proud of the two bills that were passed in 2010 HB 1414, concerning the reporting Identity in Injectable Drug Diversion (Benefield/Foster) http://tornado.state.co.us/gov_dir/leg_dir/olls/sl2010a/sl_338.htm and
HB 1415, Sunrise Surgical Tech Registration (Gagliardi/Morse) http://tornado.state.co.us/gov_dir/leg_dir/olls/sl2010a/sl_339.htm.
END_OF_DOCUMENT_TOKEN_TO_BE_REPLACED 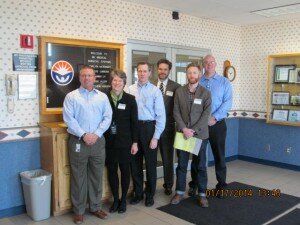 What a great way to end the week!

Steve Langan and Matthew Hansen, features writer for the Omaha World-Herald, picked me up at my house on Friday morning, and we drove to a meeting at the BD (Becton, Dickinson and Co.) plant in Columbus. It’s one of two BD plants in Columbus. There are two others in the state, one in Broken Bow and another in Holdrege.

Congressman Jeff Fortenberry, a longtime supporter of injection safety whose district now also includes the Columbus area, was at the meeting. He met with our BD colleagues and the HONOReform team, and then he led a town hall meeting for BD employees.

Evelyn and Tom McKnight had the privilege of presenting to the Central Illinois Chapter of the Association of Professionals in Infection Control last week. Here four infection preventionists discuss the new infographic that gives guidance on the single dose/multidose vial issue. See the infographic at http://oneandonlycampaign.org/single-dose-multi-dose-vial-infographic

Kim James is an employee health nurse at Brookdale Hospital in Brooklyn and member of the New York One & Only Campaign workgroup. Here she talks about her passion for injection safety.

In that Campaign I found out and was horrified by the fact that so many consumers have contracted HIV, Hepatitis B and Hepatitis C from healthcare providers. That knowledge so moved me that I have decided to really take action and to do my part to help spread the word and to see if I can in any way contribute to stemming this absolutely unfortunate practice.

I have a saying that I will be “clicking my high heels all over the world” as I try to get this message out.

I like to travel and one of the things I like doing is a little bit of community service when I go to visit. So I plan to share this knowledge every place I go. If anyone will listen to me even for a minute, I‘m going to do the very best I can with my last breath to stem unsafe injection practices that are harming our patients.

Evelyn McKnight is a survivor of the Nebraska outbreak, in which 99 cancer patients contracted Hepatitis C through reuse of an IV bag on multiple patients. 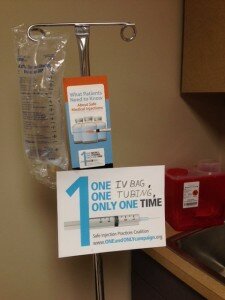 One IV Bag, One IV Tubing, and Only One Time

Recently, I had what started out as a minor health situation. But as time went on, I experienced a cascade of health complications which resulted in a not-so-minor situation. I neared dehydration, and I would need IV fluids if my condition continued to  deteriorate. The thought of an IV infusion panicked me, and I asked for 24 hours before we began IV fluids.

As I chugged Gatorade, I tried not to think about the last time I had an IV infusion, which was during chemotherapy in 2000. The nurse reused syringes to access a mutidose saline bag. When a nurse used a syringe on a patient with known Hepatitis C and then reused the same syringe to access the IV bag,  the IV bag was contaminated. This happened multiple times during the day; in fact, it was found during an investigation by Nebraska Health and Human Services that after a day’s use, the bag was cloudy, pink, with bits of sediment. In this way, 99 Nebraskans contracted Hepatitis C. END_OF_DOCUMENT_TOKEN_TO_BE_REPLACED