In this blog, HONOReform executive director Steve Langan, included in the photo with Governor Hassan, thanks colleagues in New Hampshire for two new important laws–and he includes a recent AP story. 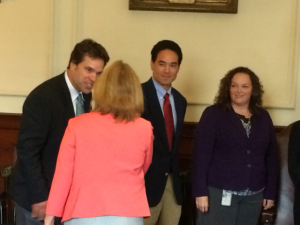 Congratulations and many thanks to our colleagues in New Hampshire, many of whom are included in the August 6 AP article by Rik Stevens, which is appended below, for their determination to create and pass legislation in New Hampshire that will help protect patients there.

“We believe these two new measures will be of great benefit in insuring the safety of the patients who are receiving care in our hospitals and also in insuring the integrity of the healthcare delivery system,” said Steve Ahnen, president of the New Hampshire Hospital Association. “These laws are an important step forward in preventing these horrific acts from occurring again in New Hampshire and, potentially serving as a model for the rest of the nation.”

We thank Mr. Ahnen and the NHHA for leadership throughout the process. And we thank Representatives Tom Sherman, MD, and Tim Copeland, for their drive and their vision.

The entire New Hampshire legislature—the third largest in the world—rallied around these bills. As a colleague said, “If we can move these bills forward here in New Hampshire, other states can, too.”

And they should. At HONOReform, we believe these two new bills—the medical technician registry bill and the drug free workplace bill—should become the national standard. To that end, we are working with colleagues in three other states and with leadership at Health and Human Services to extend the reach of these landmark bills. And to build in other essential safeguards for prevention of drug diversion.

Doing all we can to prevent drug diversion of injectables is part of the HONOReform mission. Naturally, we depend on partners and colleagues to help lead these efforts.

Again, we are proud of our gifted and determined colleagues in New Hampshire, and we thank everyone who had a hand in forming and completing “the New Hampshire bills.”

In an upcoming blog, we will hear from more of our colleagues in New Hampshire. I include the AP article, below.

CONCORD, New Hampshire — Medical technicians are now required to register and hospitals will have to test employees if drug use is suspected, under two state laws signed Wednesday by Gov. Maggie Hassan in response to a traveling technician who stole drugs and infected dozens of patients with hepatitis C.

Rep. Tom Sherman, who’s also a doctor, was a co-sponsor of the bills in response to the case of David Kwiatkowski, who is serving 39 years in prison for stealing painkillers from Exeter Hospital and replacing them with saline-filled syringes tainted with his blood.

There is still no nationwide database of misconduct or disciplinary actions against technicians, as there is for physicians. New Hampshire has taken the lead in monitoring the technicians. While some states require certain technicians to be licensed, four of the states where Kwiatkowski worked, including New Hampshire, do not license any of them.

“The goal of the registry is to close the final gap in patient protections in the settings of controlled substances,” Sherman said Wednesday. “The federal attorney prosecuting the case has estimated that this single medical technician put 8,000 patients at risk nationwide.”

Under the bill, a board will register health care workers who are not otherwise already licensed or registered and who have access to both drugs and patients. Hospitals would be required to report disciplinary actions to the board, which could perform its own investigations of wrongdoing.

Since Kwiatkowski’s arrest in July 2012, 46 people in New Hampshire, Maryland, Kansas and Pennsylvania have been diagnosed with the same strain of the hepatitis C virus he carries, and authorities say the disease played a role in one woman’s death. Kwiatkowski also worked in Michigan, New York, Arizona and Georgia.

“Our most important responsibility as a state is public safety,” said Hassan. “Our citizens can’t do anything whether it’s run a business, or go to school or raise their families if we can’t provide a safe environment for them to do that in. So these bills are an incredibly important step.”